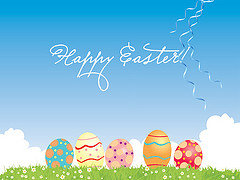 Happy Easter to everyone ! Enjoy the chocolate 😉

Having a look at Twitter… oh ! someone added me as a friend … who is he ? no idea … but he has like 467 “friends”… so I guess he’s adding pretty much anyone.

Looking at his “friends” I notice this LvP whose face looked familiar. Following the bread crumbs (LvP’s blog), it turns out that I really know him ! OK, more like “I once knew him”, since I sort of worked with him like 3 months, 7 years ago.

For the story, he was the production director of the french computer game company, Cryo-Networks, in which I did a 3 months coding internship for a game based on Franck Herbert’s Sci-Fi masterpiece, Dune. The purpose of this internship was to code a random 3D landscape / ground / planet generator. So ? How cool is that ? The final result was even really not so bad ! (it was based on the Perlin noise and, by the way, I owe big to Hugo Elias for his really nice website).

So how likely was it to find LvP (Louis van Proosdij) on Twitter ? Pretty slim odds, right ? Looks like the World is as small as it is said, after all !